Most guys don't really pay attention to their belts. To them, it's simply a tool to keep their pants from falling down.
What they don't realize is that belts have a significant impact on your overall outfit. It can either be the centerpiece that brings it all together or the one thing that destroys it.
So, how do you make the right choice? How do you know what measurements to look out for? What color and material should you get? 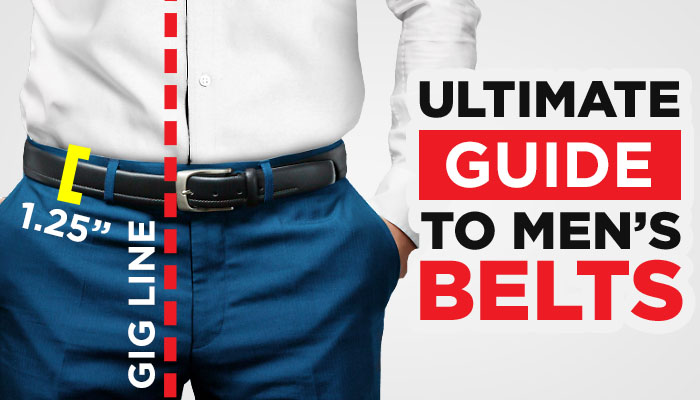 Gentlemen, we're going to answer all that and more in this article. We're going into the basics of men's belts and how to find the perfect one for you.

This article is brought to you by Anson – makers of revolutionary micro-adjustable holeless belts that fit any waist up to 50” perfectly. Plus they come with interchangeable buckles and straps, in premium full-grain leather and some great vegan options.
I recommend the Gift Box, which lets you create 6 different strap and buckle combinations. That’s SIX complete belts for just $99.95. With free U.S. shipping and a lifetime guarantee, it’s a no-brainer – click here to upgrade to Anson belts. 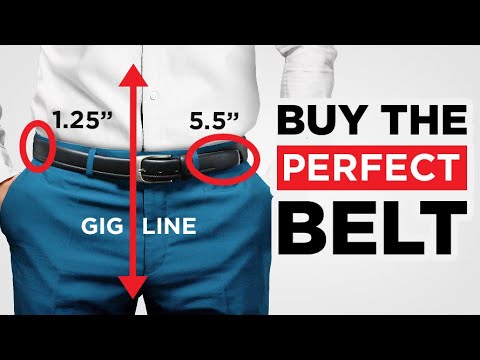 1. The Anatomy Of A Belt

Men's belts are clinching mechanisms that go around your waist, making use of tension to hold up a person's trousers.
The largest part of the belt is called the strap. This is the band that goes around your waist. At the very end, there's the buckle. 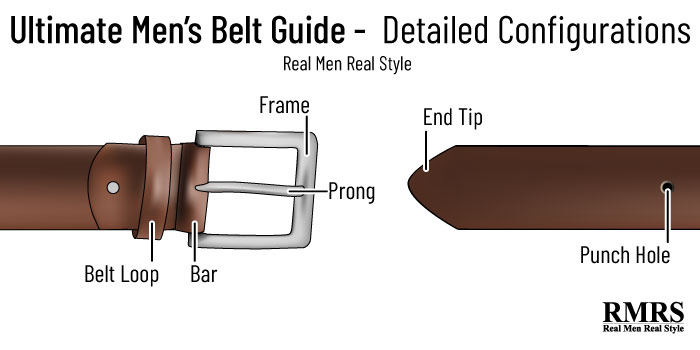 2. Brass Tacks: How A Belt Should Fit

Now, let's get right to the main point: Fit.
At the end of the day, a belt is a practical addition. Before it looks good, it needs to do its job.  So, how do you find this out?
A belt's size is determined with your waist measurement. So, the first step is to know what trousers fit you in the first place. 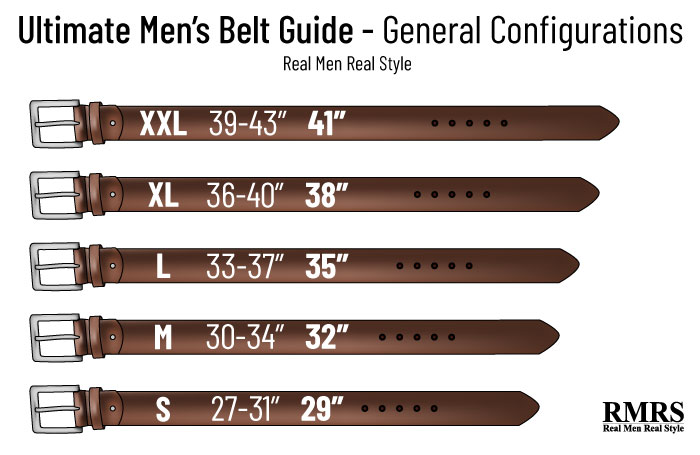 Need to know the right belt size to buy? Look no further.
If you wear a 34″ trouser waist, a belt labeled 36″-38″ will probably be in the right neighborhood. Of course, the easiest way to check is just to try the belt on in the store, at least wrapping it around your waist over your pants.
Just remember that it'll sit a bit tighter when it's worn properly.

The bigger your belt buckle the less formal it is. Dress belts typically have very small, flat belt buckles (and tend to be narrower belts themselves).
Larger buckles with rounded shapes are common on more casual styles. Almost all dress belts will have either a gold-colored or silver-colored finish. 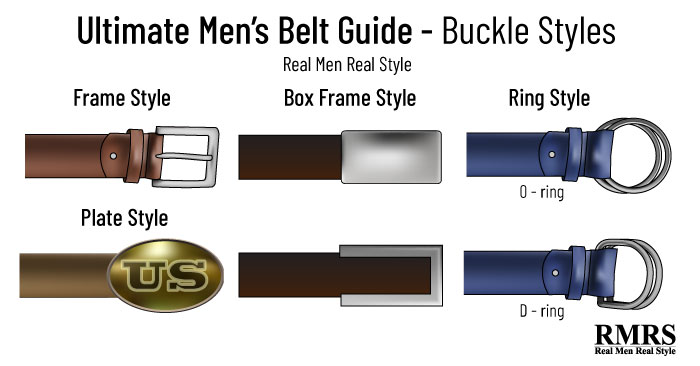 The classic frame style is the most formal one. If you pair it with a black belt, you're set for black-tie occasions.

4. The Different Categories Of Belt

Dress belts will typically be made with fine-grain leather, both on the top and underside. They should not exceed 1.5 inches in width, or it becomes a casual belt (which I'll cover below).
The end should be long enough to finish through the first loop of your trousers only.
The quality of the leather is the one common factor: Calfskin is the most common material used for such belts, and a good one will have soft, supple leather.
Though, some bolder variations can come in lizard skin or crocodile leather. 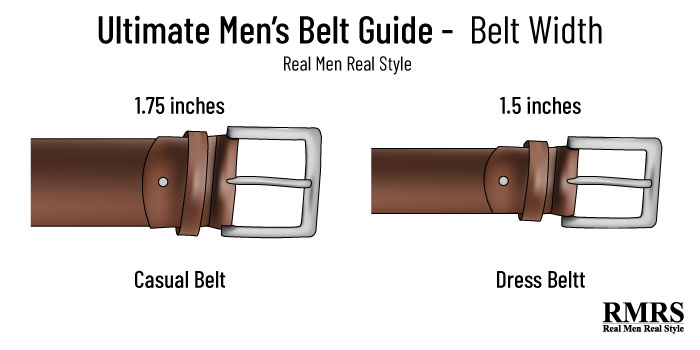 The wider the belt, the more casual it is. Take care not to go beneath 1.5 inches though, as you'd be hitting female territory.

Like I said above, casual belts are usually about 1.5-2 inches wide. A casual men's belt can utilize the same colors and leather as its formal cousin, but it can come in many more styles.

These belts come with a twisting buckle, allowing you some versatility in your wardrobe. All you have to do is pull the buckle up and twist, and voilà – you have a second belt.
Reversible belts are commonly found with black and brown sides.

Very similar-looking belts sometimes vary widely in cost.
Flex the belt to make sure it hasn't turned brittle or started to crack. Another good test of leather is to score the back very lightly with your fingernail — if a faint line appears, the leather is still soft and fresh. Old, hard leather will resist your nail.
Construction is the other major factor affecting the price of a belt. Look for small, tight stitching with no loose ends wherever the leather has been sewn.
Buckles attached with a snap on the back of the belt can be changed out, while a buckle stitched in place is the only one you can wear with the belt – some men may find the flexibility of a snapped belt worth paying more for, especially in good leather.
Men's belts can even be custom-cut at some leather goods stores. 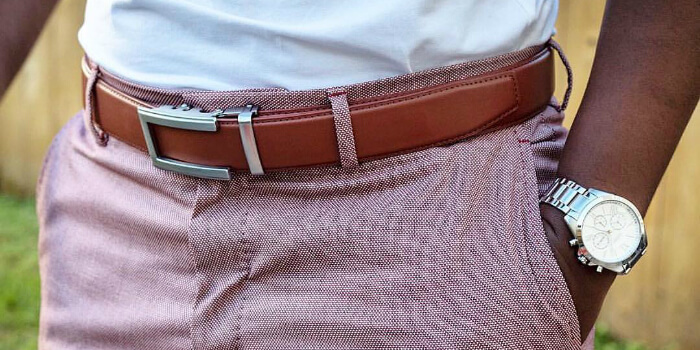 Click here to create your belt at Anson Belts.

Speaking of designer goods, some high-end jeans have a famous label right between two of the belt loops. You may be tempted to leave the belt off so that the label can be displayed more prominently.
Don't do this.
Un-belted jeans, even expensive ones, make you look like a slob. Choose a slim belt that lets part of the label show and leave it to other people to notice your fantastic style – or not. If they weren't in the know you weren't going to impress them anyway, right?

Leather should always match leather. That rule stays with you in dress and casual wear: brown leather shoes go with a brown leather belt, and black with black.
Glossy belts should be paired with highly-polished shoes; matte shoes go with matte belts. If you're wearing casual shoes that aren't made of leather, you have more freedom to work with. Cloth shoes can be paired with cloth belts of a different color.
Rare animal patterns can be very expensive but are often considered casual.
A very high-quality ostrich-skin belt is too ostentatious for a business setting (but can be very sharp-looking out on the town).
Snakeskin and other reptilian patterns are eye-catching options as well — just keep in mind how much attention you want being drawn to your midsection.
That's where people's eyes will be going if the belt is the most distinctive part of the outfit. The same holds true for brightly-colored belts of more conventional materials.

Congratulations! You're an expert on belts now, but have you ever wondered how they came about?
For centuries, noblemen looked down on belts as a peasant fashion. REAL gentlemen only used suspenders, the alternative being seen as a so-called “Gothic” invention.
This all changed with World War I. When US troops deployed against the Central Powers, they wore a yarn belt over their uniforms. When they returned, they brought the belt with them. These veterans became the first “belt-conscious” gentlemen.

Edward VIII invented trends that quickly became integral aspects of men's style. Click here to learn how to find your style icon.
During the jazz age of the 1920s, the men's belt exploded. Younger men started to ditch vests and suspenders in favor of belts – no doubt because it was easier to dance. By the end of the 20s, the belts outnumbered suspenders by a four-to-one ratio.
By the 1930s, belts started to reign supreme. Manufacturers started making baggier trousers with integrated belt loops.
The man who solidified the belt into popular menswear was none other than The Prince of Wales, Edward VIII. He was the first man to match his belt to his shoes, formally bringing the belt into the fold of gentlemanly clothing.

Though it started as a low-class alternative to suspenders, the belt overtook its pretentious counterpart by the 1930s. There's a lot to choose from – whether your goal is back-tie, a night out in the town, or mountain-climbing, you now have the knowledge to make the right decision.